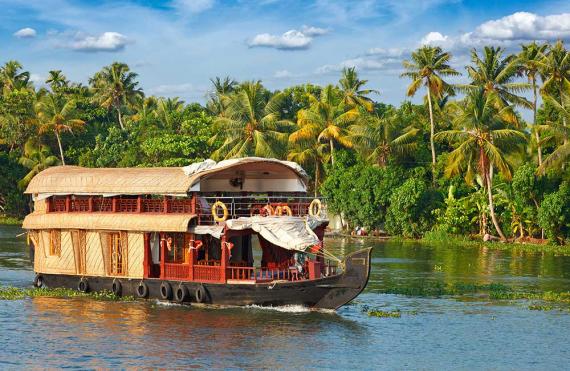 As per our guests requirements, we are specialized in customization (tailor made) with many options of Kerala luxury backwater Cruise packages of Kerala.
Please let us know your special interest and choice, accordingly we will suggest tailor made itinerary as per your desire.
You can mail us, your requirements at : "info@cosmovisiontours.com"  or  simply click "Enquire Now" and fill the form.
For more Kerala options, click - https://www.cosmovisiontours.com/india/kerala/
India is indeed a country beyond imagination. There are many locations where there are backwaters, but none to beat Kerala’s backwaters. If one has to make a list of the most visited backwaters in the entire India, then the top positions would be occupied only by the different backwater places in Kerala. These places take you to the very edge of nature, and you can breathe peacefully.
For this purpose, we have systematically arranged these places in the right order so that you do not miss out on anything. The five-day tour has been designed in such a way, only to explore the backwaters of Kerala, and that would include trips on the famous Houseboats.

Day One : Tour of Cochin
You would be greeted by our agent at the Kochi airport or railway station, and guided to the hotel, where you can check-in. You can relax for a while and then have lunch. Soon after this, we kick start our tour of Cochin and then its backwaters.
Our first sightseeing is of the Chinese fishing nets.
The non-official icons and, possibly, the most photographed of Kerala's backwater are the half dozen giant Chinese fishing nets locally called Cheena Valley, situated along Fort Cochin's northeast coast. The traders in this spiderlike, ten-meter-high trading center are from the Kublai Khan Court of AD 1400.
These labor-intensive methods become less and less viable by modern fishing techniques, with nets gradually being removed from the coast of Kerala. Smaller fishing nets protect the shorelines of Lakes Vembanad and Ashtamudi; some of the strongest are on Vypeen Island just east of Cherai beach. From here, we proceed to the St. Francis 'Church.
St. Francis 'Church has a tradition of the 16th century as one of the most famous temples in Kochi. The St. Francis Church will be a paradise with secret surprises for visitors willing to take a jump in the past. The church was a silent witness to the European conquest in this area and had an extremely significant historical significance. Situated in the middle of Fort Kochi, St. Francis Church is one of the most popular places to visit in Kochi.
You'd be a short walk to the Jewish Synagogue on one end of Jew Street in the Mattancherry Jewish Town Enclave in Fort Kochi. The Malabar Yehudans or the Jewish community of Cochin founded the synagogue in 1568. The Temple of Mattancherry Palace is a shared wall with the Synagogue of Mattancherry. The oldest in the Commonwealth of Nations is this synagogue in Mattancherry. Then we make our way to the Mattancherry Palace.
Earlier a Portuguese palace, then acknowledged as a Dutch palace, The Mattancherry Palace is in Kochi and consists of Kerala murals, which has portraits of Kochi Kings. It is now in the tentative list of the UNESCO World Heritage Site. It was in 1555 that the palace was constructed and given as a gift to the Raja of Cochin. It's time to visit Fort Kochi now.
Fort Kochi is a place of historical interest and considered to be a jewel in the crown as it has a heritage that is European and the characteristics of A Cosmopolitan. The Name Kochi has its origins from kochaazhi, and when translated from Malayalam, it means a small lagoon. Mattancherry was considered as the nerve centre of Cochin in the past.
After the tour of Kochi, we make our way into the backwaters of Kochi to view the Birds which visit.
There are many varieties of water birds that are up for viewing throughout the backwaters of Kochi. They showcase a mind-boggling collection of exquisite birds in the world of the general bird population.  It is the perfect place for the tourists to immerse themselves in the tranquility of the scenario. There are only two soft noises that one can hear in this original location. One is the smooth flow of water, and the other is the melancholy call of the water birds. One can see the waterfowl, Cormorant cuckoo, egret, heron, and the water duck, as well as the migratory Siberian cranes. White-necked stork etc. can see During October-May, Lesser Pied Kingfisher is another common bird in the lake.
Once we are finished with our pleasant viewing of the birds at the lush greens that surround them, we are back in our hotel for dinner and sleep.
Day Two : Cochin - Kumarakom
After breakfast, we start on our drive to Kumarakom. Kumarakom is  Kerala's wonderland. It is known for its mesmerizing backwaters.  It is confined or nestled in the tiny islets in the heart of Vembanad Lake,.This village retreat is magnificent. This stunning backwaters destination is captivating to be at, with the blue backwaters on Vembanad Lake's surface representing the azure sky.
From here, we leave for the bird sanctuary.
Kerala's Kumarakom Bird Sanctuary is one of the country's most popular bird-watching spots. Spread over 14 hectares, in these parts, one finds numerous uncommon avian species. Located on the banks of Kottayam's Vembanad Lake, one gets to see several migrating birds flocking in hundreds, from places like the Himalayas to Siberia.
We check into a hotel at Kumarakom, for an overnight stay and wake up the next day for our last day here.
Day Three : Alleppey
We leave for Alleppey now, and we check into a Houseboat. The cruise starts, and we get to see lovely sights.
Sit back and relax on your houseboat and enjoy the skim past ancient Chinese fishing nets; water Lilies, lush paddy fields, coir villages, rustic homes, temples, coconut groves, Innumerable lagoons, lakes, canals, and estuaries. We have Tea and biscuits in the evening and stay overnight in the floating house.
Day Four : Departure from Alleppey - Cochin
We check out of the boathouse early in the morning and leave from our port for onward journey.
Conclusion :
God has certainly been kind to the state of Kerala , where Mother nature resides permanently. We will return to see yet another section of Kerala soon.

We were a family of four. We spent two nights on a luxury cruise in Alleppey and enjoyed local food, all three meals with beverages while sailing on the lake. It was an amazing experience. Thanks to Shobhit and his team for customizing a package for us in Kerala.

Traveling on backwater in a luxury cruise of Kerala is an ultimate experience for us. It was a great experience for me and my wife to spend one night in a houseboat, it's a lifetime experience. We had booked through Cosmovision, definitely recommend them.